Originally published at Jumbly Junkery. You can comment here or there.

Ok, I figure that maybe posting the videos here isn't so bad. I kind of like having a place not youtube to look at them. So here is my second moleskine

Because I'm suuuure you guys were all wondering just how it is I make like 90% of the stuff I do, I decided to video and upload me flipping through my moleskine sketchbooks. Since I'm now working on #12, this leaves quite a bit of a backlog!! As a result, I only got 5 videoed and uploaded today (in addition to the regularly scheduled page/day on my website). You should check them out! I put them all on YouTube.

For your amusement here and now, here is the first one. I figure one video per post is enough.

I finished this last week and put it up on my site today. Thought it was too good not to share here, too. (under cut because of some nudity) 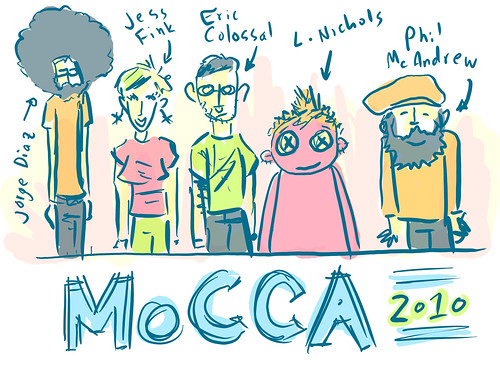 This past weekend (April 10 & 11, 2010) I was at the MoCCA Art Fest with many other awesome people. This is my third MoCCA and despite the whole fiasco with getting terribly sick after sitting in last year's sauna, I decided to try it again this year. Moving the fest to April instead of June definitely cured the whole sauna situation. In fact, this past weekend was gorgeous! However, because of the placement and cost of the show, I was unable to go to Stumptown as I had hoped I might. I find that there are often overlaps and crowding of shows and it just makes me wonder why they don't at least come to some sort of agreement/understanding of spreading things out a bit. I mean, TCAF, Stumptown, C2E2, MoCCA and Fluke all within a month of each other? Just because they're on different weekends doesn't mean I will be able to go. There's also financial spacing to consider! It's not like the small press people are rolling in money, you know? Or, like, last year when SPX overlapped with a zine fest I wanted to go to. Of course I will choose SPX over the zine fest, but ideally I would like to go to both.

The show seemed better organized than last year, overall. Though, the email communication re: tables/times/etc was still a little last minute for my tastes. The whole $5 for the first two extra badges and $10 for the ones after that up to a limit thing was stupid I thought. I mean, if you're going to charge $350-400 for a table, of COURSE we're going to put 5 of us at a table. It's not like we're in this to bleed money (and it's not like we all have much money to bleed). To top it off, charging that much for a table and then $15-20 at the door for the visitors seems like double dipping. I know MoCCA is a fund raiser, but decide where you're getting your money from. Either give us a break (and if there are too many applicants then, then start curating like TCAF) or else give the visitors a break (and thus hopefully increase traffic for us).

Possible other areas for improvement:
* Signs/posters/etc outside directing foot traffic to the show. Or, hell, there are enough of us in NYC that you could probably convince people to go poster around the city for you! Some kind of guerilla wheatpasting campaign.
* Nicer exhibitor badges (like SPX). You have a show full of cartoonists... certainly it isn't that hard to find someone to draw something! Every year I find myself excited to see the SPX badges. Every year I find myself wondering why MoCCA doesn't step it up.
* Maybe have a small exhibit at the show? Like something you might see at MoCCA itself? Something to tie the show in more with the museum. Even the New England Web Comics Weekend had a small exhibition area.

That being said, I still sold reasonably well. Not as much as Brooklyn Comics and Graphics Fest, by a LONG shot... but still ok. Enough that the hassle was worth it and enough that I was willing to sign up for next year. Though if it is this close to Stumptown the year after, I might eventually bail on MoCCA in favor of Stumptown. I mean, with the tables being as expensive as they are at MoCCA, it's not like a frequent flyer ticket + travel expenses would actually amount to being much more expensive overall.

And, even with all the downsides of MoCCA, it is still nice to see people in my home city. Plus, the people I table with aren't people I table with any other shows, so it's nice to hang out with them. If you don't already know them, be sure to check out their stuff! Jess does awesome Victorian robot porn comics (as well as other things). Jorge is a hidden talent, with his Mustang Hops: Hobo Detective and with his Iron Horse Ghosts comics (as well as his newest Monstrosity comic). Eric Colossal's Tomb is something to see, indeed! Well worth buying/reading. And Phil McAndrew... who doesn't love him? His Are You Man Enough? comic is AMAZINGLY funny and his illustrations are quite a treat! And me... well... hopefully if you're reading this you have seen some of my stuff.

So I just did this two page comic about my frustration with the excesses of digital communication. 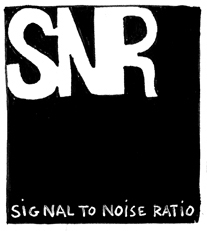 So I just finished the final page of this short comic. It will be in the next Jumbly Junkery, but, you know, I want to share! I am so excited about OUTLAW DOG that I can hardly contain it! So I thought I would put it here all in one place for you to see NOW.

First off, the fan art! 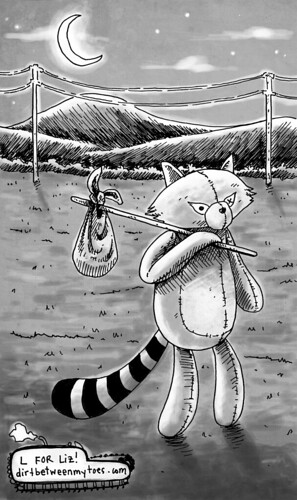 I drew this for Liz Baillie's Freewheel. If you aren't reading Freewheel, you should be! Hobos! Runaways! Stuffed red pandas! Hammocks!!

My friend Tejal writes for the Atlantic food channel online, so every now and then I do an illustration for one of her articles. Since Valentine's Day is coming up, she did an article about this cookbook written by this romance novelist, Barbara Cartland. Barbara Cartland was pretty amazing, come to find out. She wrote nearly 20 books a year, dictating them from her sofa to her secretary. She wore all pink all the time and had these Pekingese dogs. Here is a photo proof that she is probably even more eccentric than you are imagining right now: 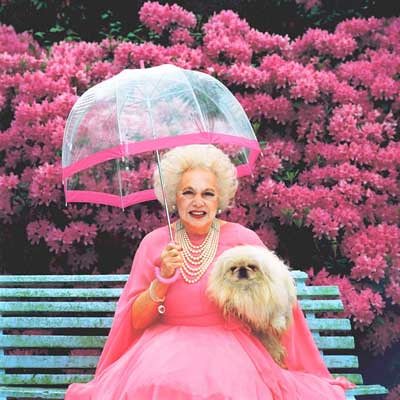 Her cookbook is full of her talking about how all these different foods are good for romance as well as your overall health... duck, salmon, beef kidneys, oysters, mushrooms, asparagus, etc. etc. Pretty much everything except for white bread and white sugar (she was a big proponent of honey as a health food). Every food photo is surrounded by porcelain figurines and flowers (all from her house) and is arranged in some sort of ridiculous method, usually involving the color pink and the shape of a heart. Unless it's the orange chicken, in which case it has a line of old, dried wishbones running a diagonal across the dish. I am totally not making this up.

ANYWAY. Here is the illustration I did for that, inspired by this amazing woman and her questionable taste in decorating food (you can click it to view larger):

Ok. I guess I should do this at least once in my life. Now you will know all kinds of embarrassing things about me. Or all my deepest secrets. Or something like that.